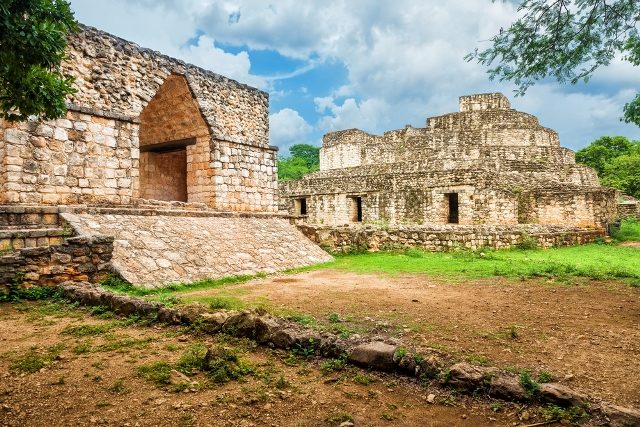 The incredible Ek Balam or “Black Yaguar” city is located in the north of Yucatan Peninsula, near Valladolil. Ek Balam is an architectonic group with beautiful buildings and fine decoration of stucco.

According to specialists, Ek Balam was a big city and its historical importance is related to the Mayan culture vestiges in the site. The site history started in 300 b.c until the arrival of the Spanish invasion. It was the capital of the Tah Empire. It covered approximately 12 square Km with 12.000 inhabitants in its main part. It is said that the site was founded by a man named Ek Balam, who came from the East and ruled for more than 40 years. The city then was founded with the name Ek Balam.

The entrance to this site is protected by two walls with a magnificent Mayan arch in the front where a Sache (sacred path) ends. The path connected Mayan reigns in ancient times. Then you will find the buildings in the center that Mayan people used for ceremonies. By walking further, you will encounter the oval palace and the Mayan Ballcourt. All the structures remain in good conditions and they are surrounded by their own forest.

At the back, you can see the Great Temple of Ek Balam, whose stair reaches the top and from which you can admire a panoramic view of the whole site as well as the surrounding forest. Through the stairs of the Great Temple you can also access the king tomb, which shows his belongings and tributes such as necklaces and earrings. During summer, the sun hits hard while you ascend through the stairs of the temple.

The main site has been called “Acropolis”, a fortified elevation of a big size and architectonic value. The structure is 160 meters long, 70 meters width and 31 meters high. It is one of the biggest excavations made in Yucatan. It has numerous stages, with plenty of faulty rooms that are communicated through different internal paths. Below the terrace covered with straw that protect the façade, you can appreciate the details of art and symbolism that decorate the temple in a marvelous way.

Archeological sites such as Chichen Itza and Ek Balam are particularly rich in details especially in human figures compared to other sites of Yucatan where figures are common or null. In Ek Balam the fine details of stucco are found in the building structures. You can also find “estelas” and the so called hieroglyphic serpents, finely carved in stone blocks.

Another additional attraction of the site is the Cenote X-Canche, located 1.5 km away from Ek Balam. The cenote has incredible facilities and activities prepared for the visitors such as rappel, and kayak. It also includes bungalows, rest rooms and restaurants.

The complete tour in the site takes 4 hours approximately if you want to see and admire all structures. Ek Balam is one of the most important archeological sites of Yucatan as you can revive Mayan history and culture. Come to Ek Balam and experience Mayan life and majesty.